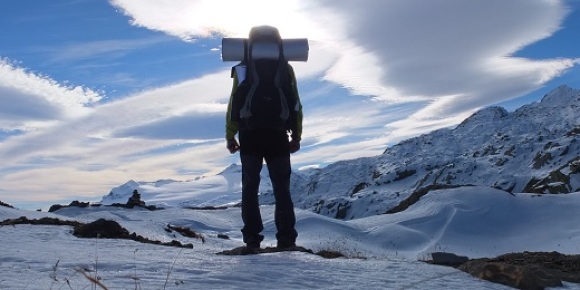 Late autumn is the perfect time for hikers who wants to get some “Into the Wild” feeling. The snow has already covered the higher parts of Alps, most of the mountain huts are closed, days are short and temperatures during the night are around zero or less. Only very little hikers decide to go into the higher parts of the Alps which makes it almost a wilderness area. The landscape during the spring is fairy-tale-like and colours almost unreal. With a great weather forecast for the next few days, it was a perfect time for a nature-lover adventure. I packed my backpack with everything I need for 4 days and went to swiss canton of Ticino in the Lepontine Alps region.

I started in Ossasco in Val Bedretto, which can be reached by a local bus from Airolo train station. The 1300m ascent to Capanna Cristallina was relatively easy up to about 2200m altitude where the path was covered by snow and some parts blocked by frozen snow which was tricky to pass without appropriate climbing gear, especially the last part just before the Cristallina Lodge. The hiking time to Cristallina indicated on the signpost in Ossasco was 3.5h. This is maybe possible with ideal weather conditions in Summer but not at this time of the year and not with a backpack for a 4 days trip. It took me about 6h to get there but the landscape and silence at the top was indescribable. There was not a single soul there, it was only me and the nature. This was the “Into the wild” feeling I was looking for. 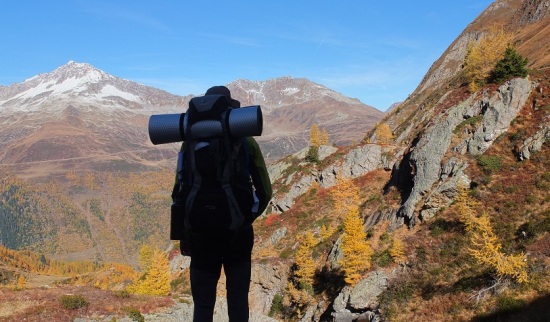 Solo hiker and the unreal background …

The narrow path from Cristallina hut in south direction leads along lake Sfundau on a steep slope. This route is particularly dangerous and is also indicated on the map in Cristallina hut with dash-dot line indicating sections with increased level of risk. In addition to that the path was totally covered by hard snow and certain parts were fully blocked. It took me 2 hours to pass lake Sfundau. At one point I really wanted to give up and turn back to the hut because the path was blocked at a very steep valley and there was a risk that I could slide 150m down the slope into the lake. After the lake the path was descending down to Lago Bianco and then further to Basodino hut and the snow fully disappeared from the path. I reached Capanna Basodino at 4:15pm and decided to stay for the night because there was not much time left untill it gets dark. 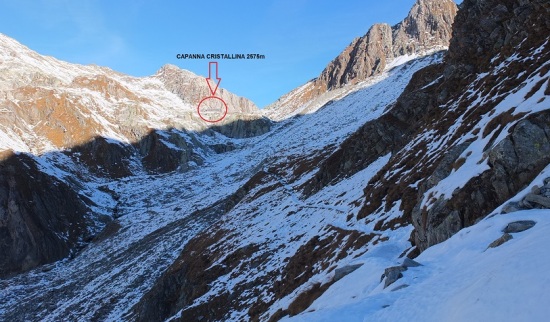 View towards Capanna Cristallina 2575m from the path along Lake Sfundau 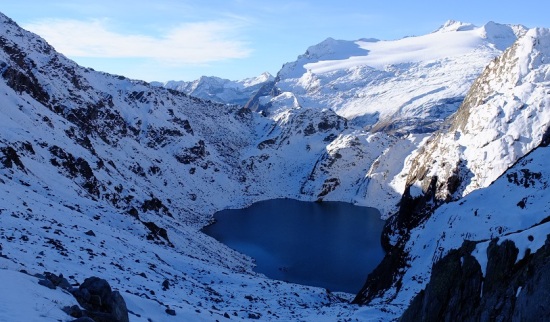 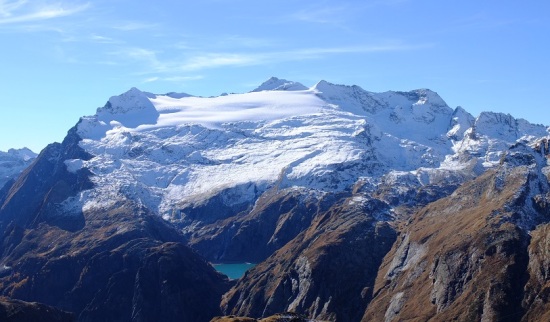 In order to cross the Swiss-Italian border through Bocchetta di Val Maggia I had to start early in the morning because it was a long hike and I didn’t know what to expect at Bocchetta di Val Maggia which is at altitude 2635m. Passing lake Robiei I started to climb towards the italian border through a scenic valley which ended with Bocchetta di Val Maggia. All along the way the 1.5km long Basodino Glacier was dominating the landscape. The rocky climb to Bocchetta is often classified as T3 and some climbing skills were necessary, particularly at the higher sections where the path was covered by snow and ice. Getting to Bocchetta was relatively easy comparing with descending the icy slope of the valley on the italian side. It was the second time during my trip where I was considering to turn back. I even used my knive as an axe to prevent sliding down the icy slope. Trekking poles would be very useful here! After passing Bochetta the path led into Val Formazza with couple of lakes on the way (Laghi Boden). After passing Rifiugio Maria Luisa and checking the shelter I visited the nearest village Riale. This 400m descent and ascent back to the hut took all my energy and I came back at 8pm exhausted into the hut after almost 2 hours hiking through a complete darkness. From time to time, when I aimed my headlamp to the side, I saw a pair of green eyes in the forest looking at me. I felt like a prey being observed by a predator … That gave me of course additional kick of energy to get to the hut as quickly as possible. I hope these animal were only harmless foxes … But you never know … 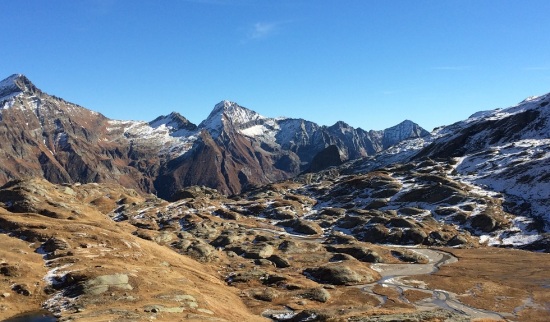 Already on the italian side – Laghi Boden 2370m

The hike through Passo San Giacomo was relatively flat and easy. I made a very long break on the way at Toggia lake enjoying the view over Val Formazza and sourrounding mountains but also recovering strength from the day before. After San Giacomo I entered Bendretto Valley and the landscape changed to colorful autumn pattern. It was one of the most beautiful parts of my tour which I really enjoyed. The Alps in Ticino are magnificent at this time of the year. I reached All’Acqua at about 1pm, had a beer in the restaurant and jumped into the bus to Airolo. The adventure came to an end :). 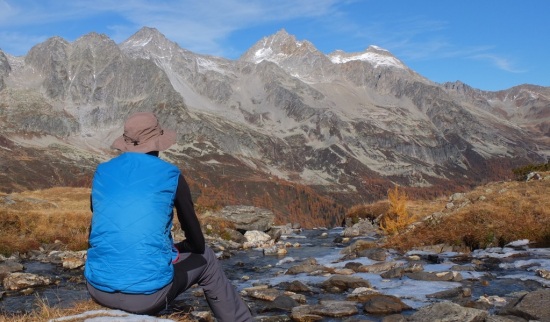 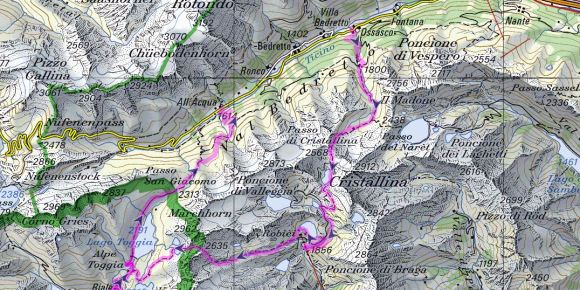 11 comments on “Solo hike in the Lepontine Alps, Ticino/Piedmont, Switzerland/Italy”