Posted by meczek on July 8, 2012 in Destinations, Europe, France

Colmar is a city in Alsace, a region lying on the west bank of the river Rhine, between the Rhine and the Vosges Mountains.
Alsace was part of the German-speaking area of central Europe, and to this day a large proportion of the population, speak Alsacian, a dialectal form of German language. In the last two centuries, Alsace has passed from Germany to France and back. Since the end of World War 2 in 1945 Alsace belongs to France.
The beautiful Colmar village is surrounded by vineyard hills of the southern Vosges Mountains. Is also a part of the Alsace Wine Route which is one of the oldest wine routes in France. It is about 170km long and runs through 70 wine-growing beautiful villages, renowned for being some of the most beautiful villages in the Alsace. The following villages are considered as the most beautiful in the region: Colmar, Ribeauvillé, Riquewihr, Obernai, Eguisheim, Dambach-la-Ville.

There is a lot to see in the village but the following cannot be missed:
1. Old Town – You cannot miss that one! This is why you have come to Colmar…

2. La Petite Venise (The Little Venice district) – From the Fishmonger District you can book a canal boat and take a boat tour on the river Lauch which will take you through all the most interesting parts of the Little Venice. 3. Quai de la Poissonnerie – This part of the village is the old fishmonger’s district where fishermen lived centuries ago. The beautiful houses along the route are well-preserved and fairy-tale painted.

4. Marché couvert de Colmar (Market Hall) – Market hall located at the along the Little Venice boat tour. It is here where the villagers brought their goods on boats to sell it at the market 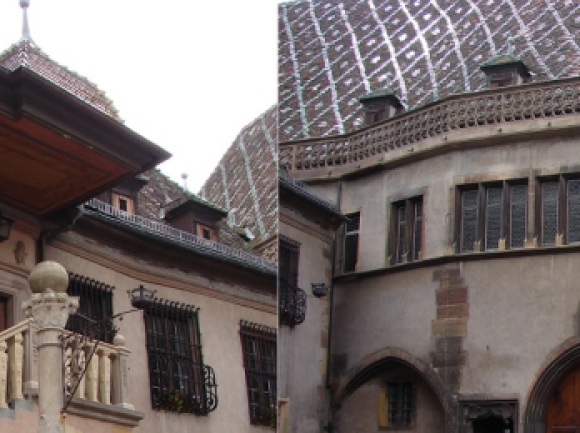